Donald W. Wilson, 26 year member of the Piedmont Community College (PCC) Board of Trustees, and recently named Board Emeritus, is the recipient of the 2019 Southern Region Trustee Leadership award. This award comes after a unanimous nomination from fellow PCC Board members.

Wilson was appointed to the PCC Board by the Governor of North Carolina in 1990. During his time of service, he acted as the Finance Chair for 11 years and as the Chairman of the Board of Trustees for a two-year term.

“Donald has been a quiet leader for almost four decades, epitomizing the word “servanthood,” shared Board members in Wilson’s nomination.

During his time on the Piedmont Community College Board of Trustees, Wilson worked diligently to ensure the implementation the Electrical Power Production Technology program, as well as the Early College program. He was also instrumental in the Kirby Rebirth renovation project that was a joint effort between the College, Person County, and the local Arts Council. These three programs were pursued by Trustee Wilson as he knew they would uniquely meet the needs of the community, and enhance the lives of our citizens.

Wilson consistently and cohesively worked with county and state legislators as he sought funding and support for the College and its’ programs. His positive and personal relationships with our lawmakers, combined with their respect for him, greatly enhanced our ability to secure funding for the College. Wilson was perfectly comfortable discussing matters of importance for the community college with our elected officials. This was especially important during the times of economic downturn experienced by our community, as well as so much of the country.

In 2016, Wilson was diagnosed with ALS and resigned from the PCC Board, as he felt he could no longer serve at the level he felt the college deserved. With no speech and limited motor function, he still advises Dr. Pamela G. Senegal, President, Piedmont Community College with regular emails. He continues to champion the value of a community college education, and the importance of the institution in our community.

“Donald’s shared wisdom during visits and the graciousness of his wife Becky helped my transition into this community greatly. I continue to be inspired by his sustained interest and insights about PCC and the region,” commented Senegal.

Wilson offered the Commencement Address in June, 2018 during the College’s Spring Graduation Ceremony. Because of his ALS, he utilized a voice transponder, which uses his eyes to communicate his words. Wilson’s heartfelt speech included inspiration, encouragement, wisdom, and humor for the graduates. In his talk, he praised the value of education and training obtained at community colleges.

Tanya Evans, Chairwoman of PCC’s Board of Trustees, shared, “Donald’s service and support for our community and the college has been longstanding and steadfast. The fact that he is as engaged as ever – despite battling this cruel disease – is a testament to his character and citizenship. It’s an honor and a privilege to be able to bring forward his contributions for recognition on a national stage.”

In 2019, the PCC Board of Trustee members recognized Wilson as a Trustee Emeritus, a true honor, yet one that seems so inadequate to express the Board’s appreciation for all he has done for the college. 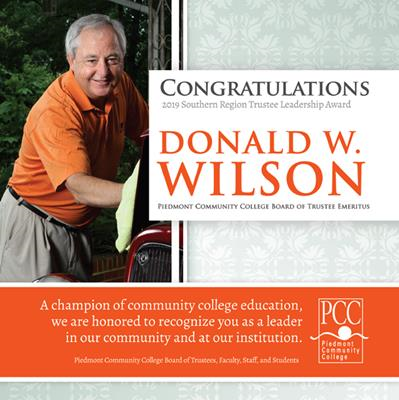