The two, through a series of public meetings and surveys, received feedback about what citizens wanted to see in the county.

They found that while they constantly hear calls for big industry in Caswell, that wasn’t exactly what their public wanted.

“Everybody says you always need industry but from what we found out throughout these surveys was people like the rural environments they’re living in and don’t want big industry coming to Caswell,” Miller said.

Instead, they found Caswell residents wanted their local government officials to keep the focus on preserving the county’s traditions.

“We found the strategic plan they wanted [to focus on] was on agriculture,” Miller said. “We found they wanted us to open up an ag center and wanted Piedmont Community College to establish some kind of agricultural education program.”

However, the ever-looming problem of financing reared its ugly head.

“We had citizens saying they wanted an ag center and we had PCC wanting to give the people what they wanted, but we knew to do that, we were going to need some money,” Miller said.

“So, me being the county planner, I looked at the situation and said, ‘Caswell’s only got so much money and there’s only so many things we can do at one time.”

Given the financial limitations, the two started brainstorming ideas and decided to combine the two efforts together.

The Center for Education and Agricultural Development (CEAD), a joint effort between the county and PCC.

Knowing that PCC would play a huge role in this project, Lindsay and Miller reached out to PCC President Dr. Pamela Senegal and Executive Director of the PCC Foundation Allison Satterfield.

The four sat down and had some frank discussions about budgeting and what they needed to achieve with the project. They came to the conclusion that the building would need basic infrastructure, water/sewage, and need to be located near a major thoroughfare.

Next, the quartet turned to funding, discovering that PCC had $1.4 million sitting in N.C. Connect Bond Funds they could draw from the state.

The only catch: “Those N.C. Connect Bond funds need a 1-3 match from the county to draw down the funding so here again, you’re thinking of the county and its financing and knowing we don’t have a lot of cash laying on hand to make that kind of match,” Miller said.

Once again, though, the four were prepared for the problem.

A few years back, the county brought the Pelham Industrial Park to the county, in hopes of attracting industry to the area. The 171-acre park was situated near two four-lane highways — U.S. 29/I-785 and U.S. 58.

For whatever reason, the project never really took off and for the past several years, the center has sat mostly empty and unused.

The center also sat across the road from an attractive parcel of unused farmland that Lindsay, Miller, Satterfield and Senegal knew the county could capitalize on.

Lindsay was able to decide which parcel of land would be more attractive from a developmental standpoint and decided that piece of land would be transferred to PCC in hopes of beginning real planning on the center.

“We decided why not transfer some of that land to PCC so that would satisfy the 1-3 match we needed to pull down the funding,” Miller said. “So, we started looking at the other factors the site in Pelham and number one, it’s right along 29 and the future I-785 corridor and it’s on a major thoroughfare, so that checked that box.”

“So, for us, this kept reinforcing our need to provide something for the Pelham community along with the county,” Miller said.

With the location locked down and the funding taking shape, Lindsay, Miller, Satterfield and Senegal started thinking about the various uses of the building and center.

They talked to health officials in the county and discovered the building had the potential to provide a medical satellite campus along with providing a home for PCC’s developing agricultural programming. In addition, the four also talked about the possibility of using the center as an emergency management operations for the county as well.

“What sets this project apart for me, besides the educational components, is we’ve surrounded it by other components that both enhance education and contribute to long-term economic factors,” Lindsay said.

“Beyond the educational building, we have plans for aggregation and a distribution kind of area as well as an incubator farm. So, students, as well as possibility community members could work and have space on the incubators. They can take classes at PCC and develop hands-on skill sets. So, we’re hoping beyond that, that they can transfer students from the incubator farms to farms in our community.”

Last year, Lindsay, Miller, Satterfield and Senegal, along with various members of county and town governments, made the trip up to New Gloucester, Maine, to visit Pineland Farms — a 5,000-acre farm designed out of the shadows of the former Pineland Hospital and Training Center.

Once the group arrived, they noticed a sprawling farm complete with walking trails, ponds and an environment that promoted the physical and mental health of all those affected.

While the site was beautiful, it also gave Lindsay a bit of inspiration and helped her bring home a new perspective to the project.

“The interesting thing I took from the trip, and I think several of the other people did as well, was how businesses completely unrelated to agriculture wanted to be on or near the property just because they liked the environment of it,” Lindsay said.

“So, they had everything from insurance to tech companies to day care to a catering company so we’re hoping that happens with our project. That the activity we’re creating now in the park that has sat fairly empty for two years, will spur some growth on the other side.” 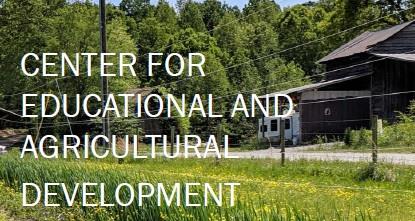