Nathan Matherly (pictured) stood inside the lobby of the new student center at Piedmont Community College Friday night and watched the crowd outside filling the seats in the courtyard of the Person County campus. Matherly was among 113 students receiving an associate’s degree during PCC’s spring commencement. The college also awarded 123 professional certificates, 16 diplomas and 87 high school equivalency diplomas.

The graduation ceremonies were marked by light-hearted, but heartfelt comments from two PCC graduates, including Paulina Lopez, a 2012 PCC graduate who, earlier this spring, earned her law degree from N.C. Central, where she attended on a full academic scholarship. 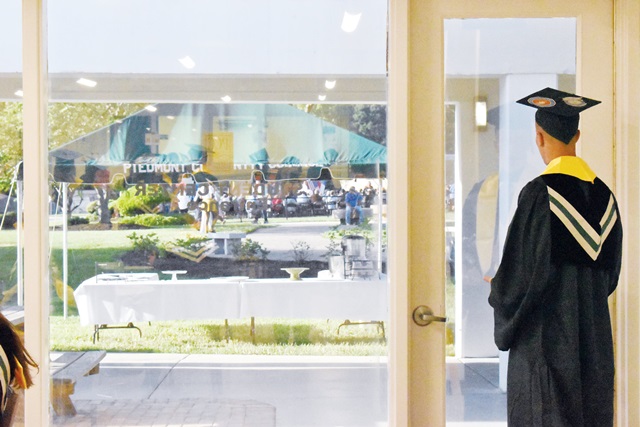 Lopez, mixed her own personal story with advice for the graduates, encouraging them to remain flexible as they work toward their own personal goals. She recounted her effort to gain admission to N.C. State were stymied when AP scores were mistakenly lost en route to the admissions office. That led Lopez home to PCC, where she got a part time job as a TRIO support services officer and met Jeannette Long, who would become her supervisor and mentor.

Long encouraged Lopez to complete her education before she entered the workforce full time. Delays in applying to law school led her to a program at the University of North Carolina, where she joined UNC’s Trans-Atlantic Master’s program, studying in Chapel Hill and in England. After she completed her master’s degree, Lopez set her sights on law school. After being denied at Duke, she was accepted at N.C. Central, which she said had already been at the top of her list.

“All of the wonderful people I’ve met, connections I’ve made, and opportunities I’ve had, by being in those programs at the time I was in them, and to be here today, have all been because my original plans had changed,” Lopez said.

Students also heard from 2019 Alumnus of the Year, Carrie Bowers, who mixed her homily with quotes from Dr. Seuss. “So what do you do now? What’s your next move? A job, more schooling, maybe you will choose both. To quote Dr. Seuss, ‘You have brains in your head. You have feet in your shoes. You can steer yourself any direction you choose. You’re on your own, and you know what you know. And you are the one who’ll decide where to go.’” Bowers said.

She praised the graduates for their ability to persevere and she encouraged them to remember those who helped them accomplish their goals. “But, by the grace of God, and some really awesome instructors, I made it! And so have you!! Today is the day that you have been counting down to. The day when all of your hard work pays off, surrounded by all of your family, friends, faculty and staff that pushed and encouraged you to get the work done,” Bowers said.

Matherly, the student who had been watching out the window as the crowd gathered before the ceremony, knew Bowers’ words were right on the mark. In the crowd to watch him walk across the stage to collect a degree in criminal justice were his parents, his sister and her three children, a crowd of happy family members ready to mark the occasion. Matherly has just a few months to enjoy his latest accomplishment. In the fall the Hurdle Mills man will join the U.S. Marine Corps. 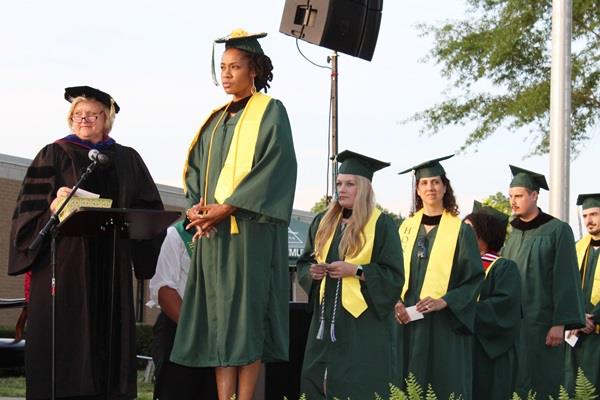