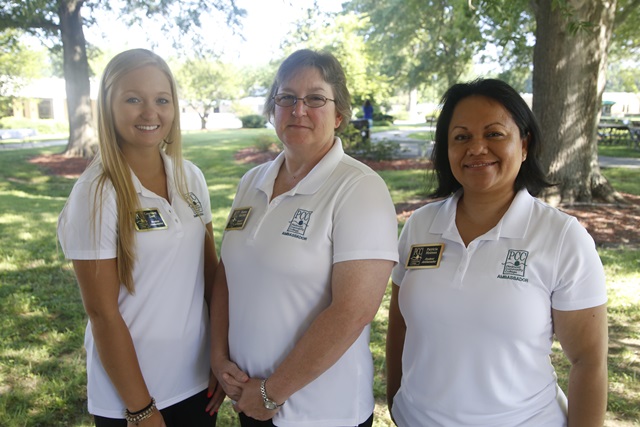 Piedmont Community College (PCC) has selected three Student Ambassadors for the 2018-2019 academic year. They are: Courtney Darr of Oxford, Patricia Holmes of Roxboro, and Dianna McGinty of Roxboro. Darr, Holmes, and McGinty will serve as official student representatives of the College at community and school functions. They will also aid as greeters, conduct tours, and assist in other ways at College functions.

Courtney Darr graduated from JF Webb High School and is currently in her second year at PCC. Enrolled in the College’s Associate Degree Nursing program, Courtney is expected to graduate in 2019. Interested in obtaining her Bachelor of Science in Nursing (BSN), Courtney plans to enroll in the RN to BSN program offered by the University of North Carolina at Greensboro (UNC-G) where BSN courses are taught on PCC’s Person County Campus.

“Everyone from the staff answering the phone to the counselor, could not have been more welcoming and helpful… I left feeling like a part of the PCC family”, Courtney said of her first experience at PCC. “[Becoming an Ambassador] would be the perfect way to honor my school for all it has done for me. I’m getting closer to achieving my dreams each and every day and would love to share my story and become more involved at PCC.”

After earning her high school equivalency diploma from PCC, Patricia Holmes was determined to continue her education. She is currently enrolled in the Associate in Arts and Associate in Human Services programs at the College, with the goal of becoming a motivational speaker.

Patricia began a women’s group, volunteers for Meals on Wheels, and returns to Adult Basic Skills and English as a second language classrooms at PCC to motivate current students to follow their dreams. Patricia has been the recipient of various awards at PCC, including “Striving for Actualization” and the “Outstanding Student in Human Services Technology”. She was also nominated for the Governor Robert W. Scott Student Leadership award in 2018.

When asked about why she would like to become a PCC Student Ambassador, Patricia noted that the position would give her the opportunity to “empower individuals to continue with their education” and “help Spanish speaking parents understand the importance of education for their children.” Patricia also shared that it’s important for parents and student to understand that “expensive does not mean better… PCC is affordable and committed to higher education”.

Dianna McGinty is also enrolled in two programs at PCC: Associate in Arts and Office Administration. After graduation, Dianna plans on continuing her studies with a four-year degree in business administration.

Currently, Dianna assists students when they visit the College’s Student Development Office where she is a work-study student. Dianna has also served as Vice President of the College’s Phi Theta Kappa Honor Society and was awarded the “Pacer Leadership” award in 2018.

“Piedmont Community College has provided so many opportunities for my own personal growth,” shared Dianna in her written application. “I believe that if I am chosen to be an ambassador that I can inspire and encourage other people to explore all of the opportunities that are available through PCC.”

PCC Ambassadors are an honorary group of students who have been nominated, interviewed, and selected by faculty and staff to represent the College. Students must maintain a 3.0 GPA and they are awarded a scholarship from the PCC Foundation. In 2014, the Jacqueline Hall Moore Student Ambassador endowment was established to help support future Ambassadors. If you are interested in donating to the Student Ambassador program, contact the PCC Foundation team at (336) 322-2102.