Leaving high school without his degree, Stanley Thornton initially tried to find success with various public works jobs. However, when the dynamics of his home life change as his stepdaughter was diagnosed with leukemia, he was forced to consider another option that would allow for more flexibility in anticipation of the multiple doctor appointments that lay ahead. This was when Stanley opened his own taxidermist shop, filling a need in his community and in his own family.

After 12 years the economy began to struggle and competition in the taxidermist business grew. So in 2017 Stanley considered another change – one that led him to the doors of Piedmont Community College (PCC).

Stanley began with free high school equivalency (HSE) classes through PCC’s Adult Basic Skills program. “It was scary at first but there are a lot of good people on the Caswell County Campus and they made me feel at home,” he recalls. “I enjoyed the classes and with help from the faculty and staff I was ready to take the exam and earn my diploma.” 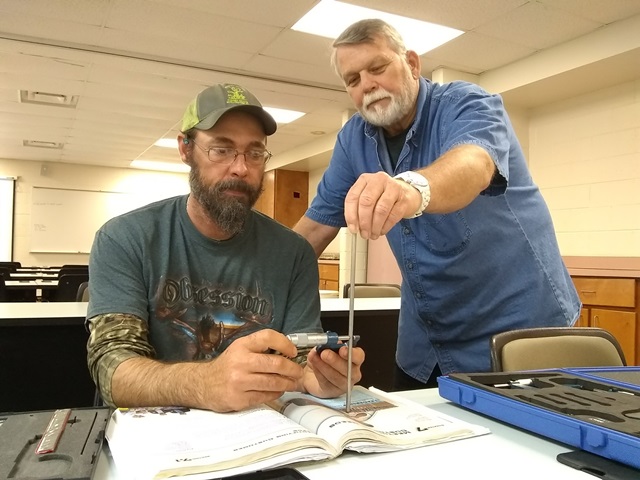 While enrolled in the HSE classes at the College, Stanley contemplated other opportunities that were available at PCC – opportunities that would expand his possibilities when considering his forthcoming entrance into the local workforce. Stanley began by enrolling in the Certified Logistics Technician (CLT) Orientation class, offered at no cost, to see if it was the right direction for his future. He successfully completed the CLT course, as well as the OSHA Forklift Operator training.

During this time, as he focused on earning his high school equivalency diploma and gaining new skills to improve his competencies, Stanley was also teaching a lifelong lesson. His six children were watching closely and learning about determination and the power of education – no matter the age. “I wanted to teach my kids that it’s never too late to better your life.” When asked how his children felt about their dad being a student, he shared that they were proud of him, always asking if he did well on exams and in the classroom.

Stanley’s overall goal is to have the credentials to be successful in a new job. He is currently enrolled in Certified Production Technology and looks forward to completing the Siemens Level I training at PCC this spring. Stanley understands that industry needs have changed over the years and values the resources available to him through his local community college.

As with all individuals, Stanley’s life has labels. He is a husband and a dad. He has been a public employee and an entrepreneur. He was a high school dropout and now, by challenging himself and working hard to earn credentials that will make him a better candidate for a job in his community, Stanley is a college success story among his peers, instructors, community, and his family.

For this reason, Stanley has been nominated by his PCC instructors for the Dallas Herring Achievement Award. This award was established by the North Carolina Community College System to honor the late Dr. Dallas Herring whose philosophy of “taking people where they are and carrying them as far as they can go” is the guiding principle of the system. The award is given annually to a current or former community college student who best embodies Dr. Herring’s philosophy. The 2018 announcement will be made by the system office committee in March.