PECIL inaugural class looks back at first year of partnership 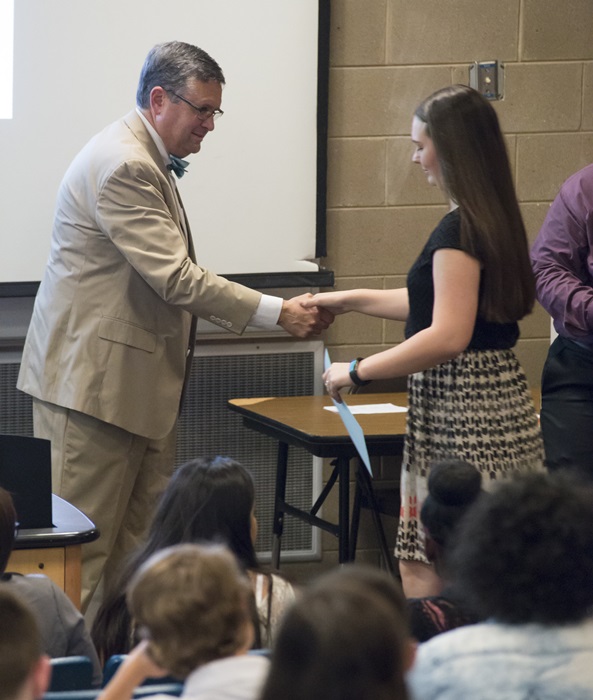 Marking the end of the school year, the inaugural class of Person Early College High School for Innovation and Leadership, held its One Year Milestone Celebration, Thursday, May 18.

Students took the opportunity to share what they learned and how they have grown since deciding to become a student at the school. Parents, as well as staff and administration of both Person County Schools and Piedmont Community College and others from the community filled the auditorium.

Through the eyes of a student
Sean Reaves talked about leadership. He explained that leadership is guiding people down the correct path and helping them to make good decisions.

They also exhibited leadership by going to the middle schools in the county and recruiting students to attend the early college.

Jackson Evans talked about the STEM-based activities students participated in. He described them as fun and hands on, which helped students understand what they were talking about in class in a new way.

“Presenting our work, also helps us with our public speaking skills. During our music class we presented our projects about our favorite musician. This has helped those of us who have had to present at other places, like the Technology Fair and visiting the middle and elementary schools,” he said.

He added those skills will help them when they have to speak in front of large crowds.

Jericka Richmond talked about the Transfer College Pathway and the activities she participated in.

Students who participated in this program visited elementary schools and led instructional activities for science and math. Richmond said she and her classmates built relationships with the children at the elementary schools.

“It was a great experience” she said.

President’s view
Piedmont Community College President Walter Bartlett asked students if they realized they were a part of history. He referred to a story in 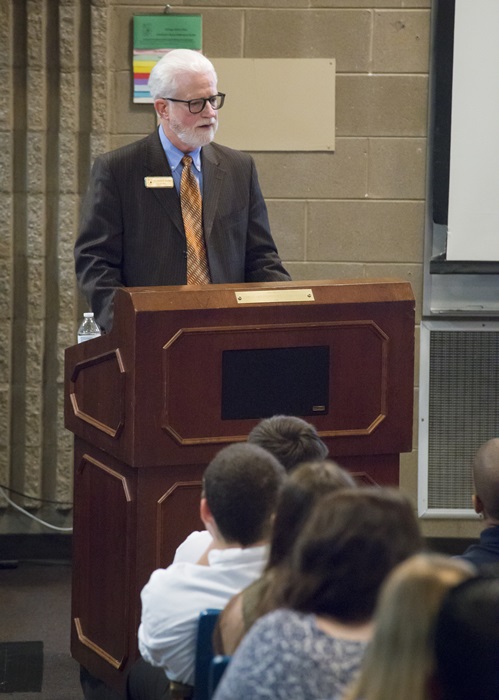 the Courier- Times, May 28, 2008, which described the start of an early college in the county.

The article predicted the students would be starting at the school for the 2009-2010 academic year. It was a few years later, but most importantly, it started.

“I read that because I want you all to understand something. This has been an academic endeavor that’s been long coming, planning since as you can hear, late 2007. I’m really proud of the school system and Piedmont Community College for being persistent and making sure this came to be. It has taken us a while but we were able to make it happen.”

He said it makes him happy to look out his office window and see them in the courtyard enjoying themselves.

Bartlett told the students he admired their courage.

“You show courage. You could have chosen to go to Person High School or Roxboro Community School or Roxboro Christian Academy or stayed at home school, but you choose to go in this school. That took a tremendous amount of courage,” he said. “Nobody else has done this.”

They didn’t know what to expect or even who they would end up being classmates with.

He also commended them for seizing the opportunity to participate in activities offered by the college. He applauded them for overcoming the mindset that ninth grade is not mature enough to deal with the collegiate environment.

He considers them a part of the college family.

Finally he challenged them to remain diligent in their studies, in their endeavors and embrace their status as pioneers.