In celebration of Women’s History Month, Piedmont Community College (PCC) will host the live theatrical and musical performance, “Ain’t I a Woman!” from 6-7:30 p.m. on Wednesday, April 5 at the Kirby Cultural Arts Complex (KCAC).

Chamber Music Theatre is a unique presentation format developed by the nationally acclaimed Core Ensemble, which features a marriage of theatrical narrative to chamber music performance. The musicians will perform chamber music ranging from new and traditional concert pieces to vernacular styles such as jazz, tango, folk, and spiritual. This musical score is drawn from the heartfelt spirituals of the Deep South, the urban exuberance of the Jazz Age, and concert music by African American composers including Diane Monroe. 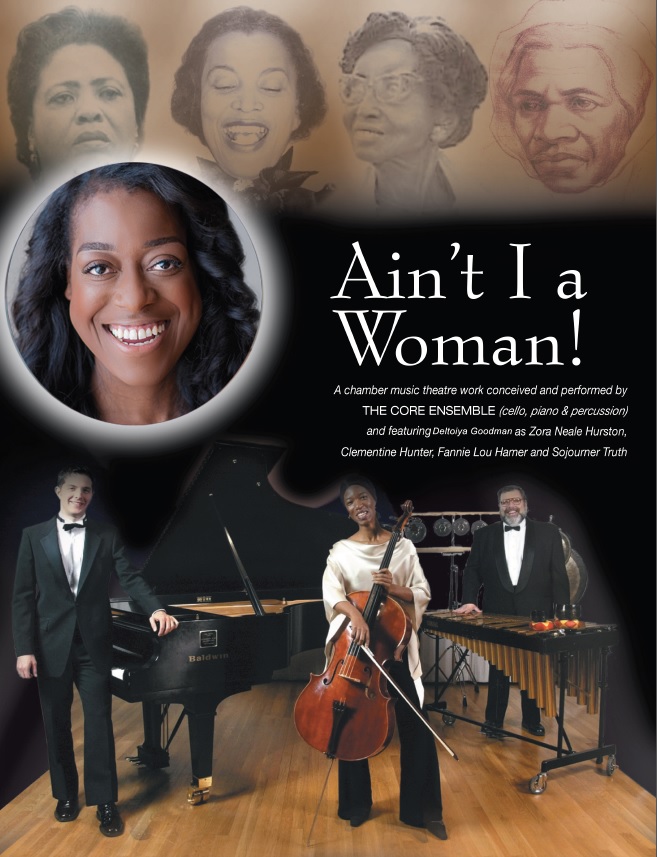 Goodman has appeared in theater works such as To Kill a Mockingbird and The Wiz. Her film credits include Let’s Do Lunch and Baby.

Pianist Darmanie has performed throughout the Americas, Europe, and the Caribbean. He has participated and won prizes in a number of regional and international competitions. Festival appearances have included High Peaks Festival, Pianofest in the Hamptons, Mozarteum, Mainly Mozart, and L’Academie de Musique de Sion.

Cellist Lee, a recent graduate of The Julliard School, has given solo recitals and participated in chamber music performances in both the United States and South Korea, and in cities such as New York, Nashville, Seattle, Brevard (NC), and Washington, DC.

Percussionist Parola has commissioned dozens of new chamber music trios for the unique instrumental combination of cello, piano, and percussion with hundreds of performances and residency programs throughout the United States and at international venues in England, Russia, Ukraine, and Australia. His recordings have been broadcast internationally and can be heard on the New World, Albany and Centaur labels.

Since 1993, the Core Ensemble has toured in every region of the United States and internationally to Australia, England, Russia, Ukraine, and the British Virgin Islands. The Core Ensemble has received support from the National Endowment for the Arts, US Department of State’s Bureau of Education and Cultural Affairs, and the Aaron Copland Fund for Music. The Boston Globe hailed the Core Ensemble as “often formidable, always intelligent, and ultimately compelling.”

According to Dr. Joyce Johnson, Vice President, Instruction and Student Development, at PCC, “This performance is a wonderful celebration of women’s experiences. The lives of these four women provide a portal through which audiences of all ages will be able to experience a diversity of perspectives while bearing witness to the varied way in which individual women have overcome seemingly insurmountable hurdles to justice and freedom.”

Vanessa Bass, Dean, Learning Resources Centers, PCC, and sponsor of the performance, felt that it was “an excellent opportunity to celebrate both Women’s History Month and Black History Month.” She further added, “Women of all races and socioeconomic statuses can relate to one or more of the experiences of women depicted in this amazing performance.”

In addition to the performance, Student Development staff will be available to assist prospective students interested in attending Piedmont Community College and provide information about the College’s various programs of study and scholarships.

The event is free and open to the public. However, if attendees wish to make a donation, gifts will be contributed to the PCC Foundation Scholarship Program.