Students and staff of Person Early College for Innovation and Leadership (PECIL) celebrated their first semester achievements on Thursday, December 15.

“We’ve reached a whole semester in the opening of our new school,” Johnson said.

Sharing some of the activities the students and staff experienced during the first semester, Johnson added, “We’ve reached a milestone, we’ve completed a semester. Look at all those wonderful things that you got to do. You took your first set of exams. We’re so proud of you.”

Johnson isn’t the only one who is proud and has noticed the achievements obtained by the students.

Johnson read a message from one parent about the school.

“This school has given students so many opportunities to learn in a oneon one environment,” Johnson read. “We have watched our child flourish since being at PCC (Piedmont Community College).”

“This school really means so much to me and I’m sure it does to everyone else,” Whitlow said. “We’ve really enjoyed the different environment this school has offered, the relationship we’ve acquired with each other and going to the office without being in trouble.”

Whitlow introduced Person County Schools Supt. Danny Holloman and thanked him for believing in her generation and creating the school.

“I think it’s fitting that my last day in the physical office at Person County Schools before I retire that I have the good fortune of addressing the first class of Person Early College for Innovation and Leadership or as I like to call you the class of 2021,” Holloman said.

Holloman explained why it is important to address the students as the class of 2021. To him by saying it, it will be engrained in the students’ minds and encourage them to graduate. 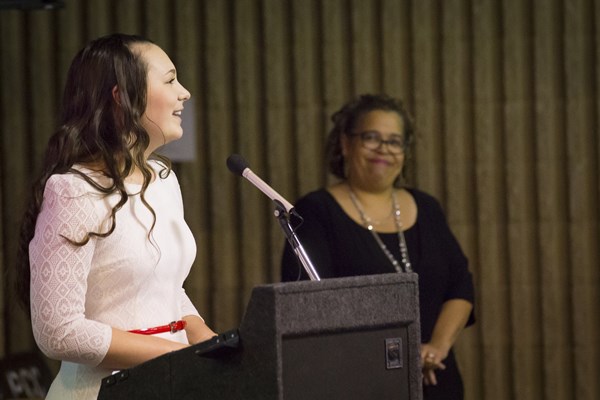 Holloman told the students he has often said he wished an opportunity such as PECIL had been available for him when he was their age.

“Imagine being able to eventually get an associate degree for free and having two years of college credit that will transfer to a college or university or having a skill upon graduation that will make you marketable,” Holloman said.

Holloman then called on some PECIL students to talk about their experience so far.

Sean Reaves said his favorite part was being able to have a one-on-one relationship with every teacher and not just being another student, but an individual.

Brianna Bradsher said she applied to PECIL because of the opportunity to have two years of free college.

Jonathan Christian said, “I applied because it would be something new, something fun.”

For Makayla Ridgeway being a student at PECIL has made her think about the future more.

Matthew Lopez said it has helped him become a better person in society and meet new faces.

Whitlow says her number one goal is to have a personal relationship with everyone. She said she plans to work with children in some form after college.

Josh Tavern said his goal is to get even better grades and be an entrepreneur.