Piedmont Community College (PCC) has selected three Student Ambassadors for the 2016-2017 academic year. They are: Tanika Bass of Stem, Drew Davis of Roxboro, and Joshua Welch of Timberlake. Bass, Davis, and Welch will serve as official student representatives of the College at community and school functions. They will also aid as greeters, conduct tours, and assist in other ways at College functions. 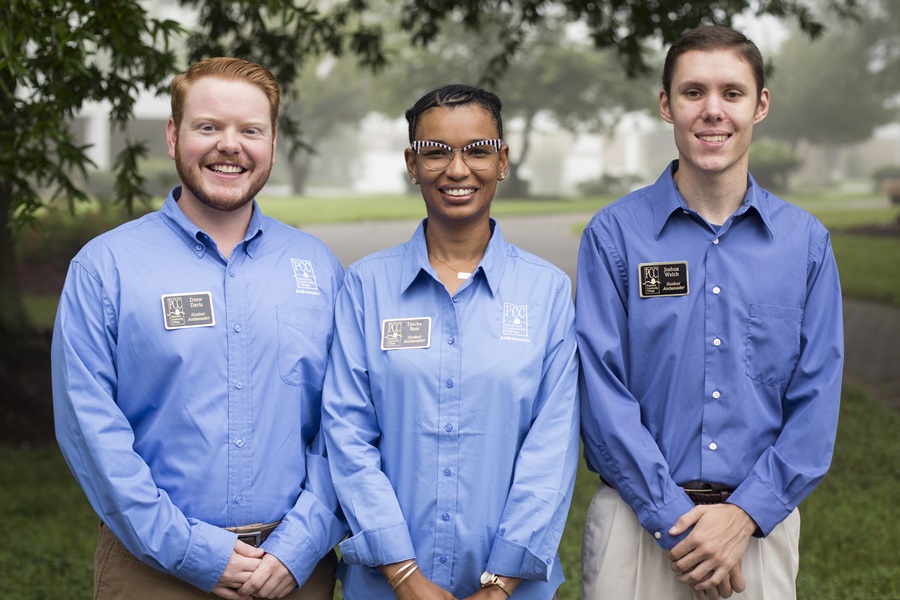 Tanika Bass graduated from Grimsley High School, located in Greensboro, and previously attended Vance-Granville and Guildford Tech Community Colleges. From her two previous institutions, Bass was able to transfer 38 credits to PCC. She is currently enrolled as a second year nursing students.

“I instantly had a good feeling when I first visited the [PCC Person County] campus to inquire about the [nursing] program. The staff was very informative and made me feel like I was already a part of the PCC family,” commented Bass. “When I was offered the opportunity to be an Ambassador, I was excited. I saw it as a great way to give back to the school. It would be a win-win situation if I could help others be as fulfilled as myself, receiving an education at Piedmont Community College.”

Drew Davis, also a second year nursing student, graduated from Roxboro Community School in 2012 and was named PCC’s Outstanding Graduate in the Associate in Science program in 2014. Davis shared, “For me, being an Ambassador would mean helping other students realize even though college will get tough, they should stick with it, enjoy the experience, and know they are not alone. They have great instructors and fellow classmates to help them along the way.”

Joshua Welch is a 2014 graduate of a Christian-based homeschool; he is currently studying criminal justice. After completing the program at PCC, he hopes to transfer to North Carolina Central University for his 4-year degree. Welch’s long-term plan is to return home and work for the Roxboro Police Department. “Being a PCC Ambassador allows me the opportunity to serve the faculty and student body,” said Welch. “It is my aim to present a positive image of PCC as a whole through my interactions with the citizens of Roxboro and Person County.”

PCC Ambassadors are an honorary group of students who have been nominated, interviewed, and selected by faculty and staff to represent the College. Students must maintain a 3.0 GPA and they are awarded a scholarship from the PCC Foundation. In 2014, the Jacqueline Hall Moore Student Ambassador endowment was established to help support future Ambassadors. If you are interested in donating to the Student Ambassador program, contact the PCC Foundation team at (336) 322-2105.
Photo: Drew Davis, Tanika Bass, and Joshua Welch