The new printers will be placed in the DEAT laboratory on PCC’s Caswell County Campus in Yanceyville and will be used heavily by students in that program. Currently students design and develop 3D art and animation using computer software, viewing their creations on a computer screen and occasionally printing on an older, slower 3D printer with limited ability. Access to the new MakerBot printers will bring the students’ creation to life more easily, allowing them to present their work as a tangible object.

“I have been looking forward to these printers with great enthusiasm since learning the grant was approved. Having three much larger printers on campus will allow us to print more items each semester and at a better quality. Our students love seeing their 3D models transformed into something tangible that they can really show off,” commented DEAT instructor Chelsea Porter. 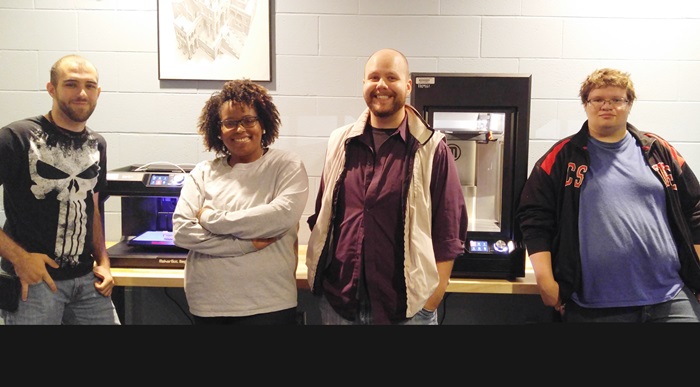 Students in the DEAT program are enrolled in multiple classes specializing in 3D computer art and animation. These courses provide in-depth demonstration and practice in modeling and texturing in a 3D environment for use in gaming, film, and advertising. Emphasis is placed on understanding the process and techniques involved in the creation of 3D models and animations.

Upon completion, students are able to create and manipulate objects in order to demonstrate an understanding of 3D animation. Students create 3D artwork ranging from fully animated characters to elaborate environments and objects.

Student Micah Yarber shared, “As students, we’ve amassed a fine collection of computer generated 3D models that we’re quite proud of. The unfortunate side of them being ‘computer generated’ is that they’re generally limited to being viewed only on the computer. It’s going to be pretty awesome to be able to show people what I’ve been working on these last semesters and I’ll literally have it right there in my hands!”

Much like other technology, 3D printers have improved dramatically since PCC acquired its first piece of equipment. The new MakerBot printers will allow students to print larger prototypes with movable parts. In addition, the time to print their creations will be significantly less due to the multiple printers being able to produce several prints simultaneously.

About PCC’s Digital Effects and Animation Technology program:
The DEAT curriculum is designed to provide students with the training necessary to become competent in creating, manipulating, and animating digital images. Courses are available on the Person and Caswell County Campus to students via the curriculum program. High school students also have the opportunity to enroll in DEAT classes through the Career and College Promise program.

Students take courses covering computer hardware/software applications, computer animation, creation and manipulation of digital images, and nonlinear editing. Graduates should qualify for employment in the creation and/or editing of a variety of media forms.

Several DEAT classes are offer during PCC’s Fall 2016 semester, including Introduction to DEAT, 2D Design & Animation II, 3D Design & Animation II, DEAT Modeling, and Implementation Project I. For more information or to register, contact Paula Hindman at Paula.Hindman@piedmontcc.edu or (336) 694-8069 or Chelsea Porter at Chelsea.Porter@piedmontcc.edu or (336) 694-8071. Additional information can also be viewed at www.piedmontcc.edu/deat.