Former Piedmont Community College Student Ambassador and founding member of the PCC Alumni Partnership, Alan Duncan, was recognized as the 2016 Alumnus of Year during a ceremony held on Friday, April 1 at the Kirby Cultural Arts Complex. 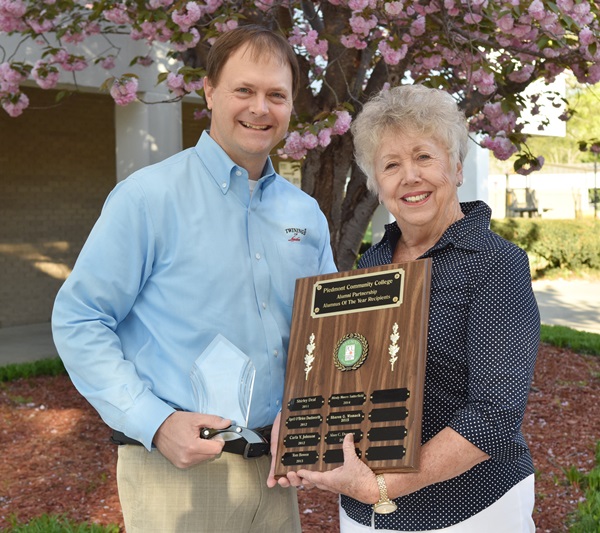 Duncan received his accounting degree in 1994 from Piedmont Community College and continued his education at Appalachian State University, receiving a degree in Business Technology. He quickly moved into various leadership roles, beginning with Dan River Mills and Crown Craft. Duncan now serves as vice president of operations at Twinings North America, located in Greensboro where he has been the only employee to receive the “Above and Beyond the Call of Duty” award twice.

In addition to success in his professional career, Duncan was one of the first Student Ambassadors at Piedmont Community College. He was also a founding member of the Alumni cabinet in 2004 and currently serves on the scholarship committee and advisory board for the Partnership.

In the community, Duncan serves on Relay of Life teams, Person County Recreation Advisory Board, and in leadership roles at his church.

“It is with great honor and pride that I accept the PCC Alumnus of the Year Award for 2016,” commented Duncan. “In the fall of 1991, I walked onto the campus of Piedmont Community College as a 19 year old without a path, goal, or any ideas about what I wanted to do with my career. During the following year, PCC provided me with opportunities to apply for scholarships (which I received), interview for a job (for which I was hired), and earn an education that would lay the foundation for me to build a career… Thank you for allowing me to represent PCC as the 2016 Alumnus of the Year.”

Duncan and his wife, Tisha are also members of the PCC Foundation’s President’s Club giving circle. They live with their daughter, Alanabeth, in Person County.

Nominees for the PCC Alumni Partnership Alumnus of the Year award must have completed a degree, diploma, or certificate program at PCC; demonstrated support to the College through monetary contributions and/or volunteer service, have achievement in their profession, and have outstanding service in civic/community affairs.

To learn more about the PCC Alumni Partnership, visit www.piedmontcc.edu/alumni or contact Patti Clayton at (336) 322-2105 or alumni@piedmontcc.edu.