Members of the Alpha Upsilon Theta chapter of the Phi Theta Kappa Honor Society at Piedmont Community College held an induction ceremony on November 5. Seventeen students were inducted to carry the torch for the academic year of 2015-2016. 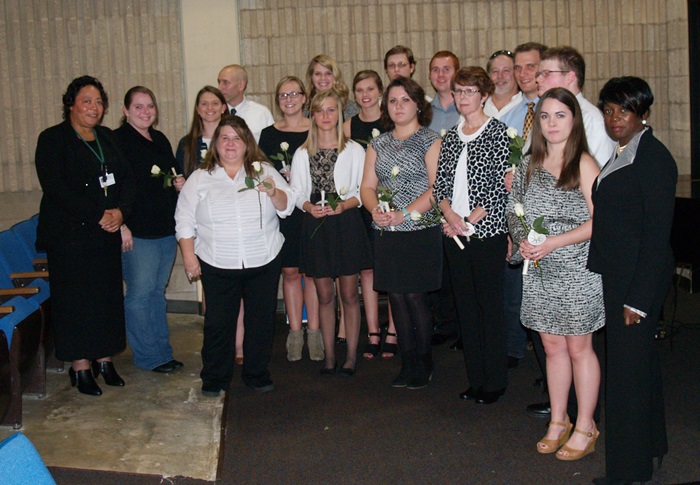 The Phi Theta Kappa Honor Society’s mission is two-fold: 1) Recognize and encourage the academic achievement of two-year college students and 2) Provide opportunities for individual growth and development through participation in honors, leadership, service, and fellowship programming.

“Piedmont Community College offers various opportunities for students in an effort to expand their education beyond the classroom. This is accomplished with student groups such as the Creative Minds Club, Student Government Association, and the Phi Theta Kappa Honor Society,” shared Dr. Walter Bartlett, president, Piedmont Community College. “For an organization like Phi Theta Kappa, students are invited to join based on academic success. Becoming a member allows students to grow their leadership skills while also giving back to the College and community. This is an essential element of PCC’s mission, vision, and values.”

Each year PCC’s PTK members participate in a service learning project based on the Honor Society’s theme. In 2013 and 2014, the theme was “Culture of Competition”. Recognizing that community colleges across North Carolina compete for students, the 2013 project was to assist with recruiting efforts at PCC, giving presentations at open house events on and off campus. In 2014, the students hosted a singing event, “Rockin’ in Roxboro” to help raise funds for the Kirby Rebirth project. The students raised over $5,000 during this event.

In 2015, PTK members applied for and were awarded a grant for $25,000 from the Danville Regional Foundation. The funds focus on the new PTK national theme, “Frontiers of Exploration”, and will be used to purchase and install outdoor exercise equipment at a Caswell County Parks and Recreation facility. Jeanean Bustamante, chapter president, has led the charge to complete the project. The installation will begin the first week in December. An unveiling date will be announced after the installation is complete.

“We are so proud of the students inducted this evening and look forward to having them join a great group of dedicated PCC students on upcoming projects. In addition to working hard in the classroom, maintaining a 3.5 grade point average or higher, they will be asked to work hard in the community,” commented Edna Brown, PTK advisor. “Being active in the chapter instills a sense of pride in the students. The real world experiences of researching, networking, and participating in leadership roles, prepares them for their next step.”

Brown and Dr. Herman Schaumburg are the advisors for the Alpha Upsilon Theta Chapter of Piedmont Community College.