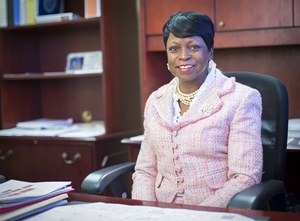 Finding her way around Roxboro and Person County shouldn’t be too hard for Piedmont Community College’s (PCC) new vice president, Dr. Joyce Blackwell Johnson, since she’s having a homecoming of sorts. Dr. Johnson, who was named PCC’s Vice President, Instruction and Student Development on Jan. 2, is a Roxboro native who was educated in the Person County Public Schools. She brings with her a distinguished career in higher education, mostly recently as Provost and Vice President for Academic and Student Affairs at Bennett College in Greensboro.

“Accepting the position at Piedmont Community College provides me with the opportunity to return to my hometown and contribute to the success and future development of the community that gave me my start in life,” said Dr. Johnson. “I find great joy and satisfaction in knowing that my work is making a difference in the lives of others in my hometown community. For me, there is no greater satisfaction.”

“In our search for PCC’s next Vice President, Instruction and Student Development, we were looking for someone with the ability to help us move our instruction and student development areas to the next level,” said Dr. Walter Bartlett, PCC President. “We are planning the implementation of a student success learning initiative, plus we want to significantly increase our connectivity with four-year institutions. These two elements along with our well-established technical programs will keep PCC academically strong and foster meaningful student success. Dr. Johnson has previous experience and success in all these areas. She has demonstrated an ability to adapt to both state and private higher education institutions and to transform areas quickly. That, coupled with her ties to the community, made her an ideal choice for PCC.”

Dr. Johnson is nationally recognized as a scholar of peace history. Her pioneer study, No Peace without Freedom:  Race and the Women’s International League for Peace and Freedom, 1915-1975 (Southern Illinois University Press, 2004), was nominated in 2005 for the Scott Bills Prize for Best Book on Peace History). It is the first and only study written to date on the national and international peace activism of African-American women. She has widely published articles on African-American peace activism in various scholarly journals and books. She also served as Associate Editor of the Encyclopedia for Violence, Peace and Conflict.  She is a reviewer for the Journal of American History and the American Historical Review; her most recent book reviewed was in February 2014.

Dr. Johnson is the daughter of Eunice Blackwell of the Allensville community and the late Joseph Blackwell. She has two adult children:  Oriana, a doctoral student at North Carolina State University, and Calvin who is currently earning a second Master’s degree in Aeronautical Engineering from the University of Hertfordshire in England; and a nine-year-old grandson, Kiaje.

Get help with your FAFSA forms at PCC on Feb. 28 College News