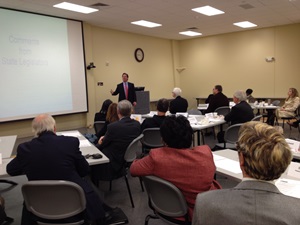 Piedmont Community College (PCC) President Dr. Walter Bartlett outlined the North Carolina Community College System’s (NCCCS) three budget priorities for 2015-17 on Monday during a Legislative Breakfast held at the College. He also discussed long-range plans for PCC that include both an Early College High School and an Early College Middle School as well as a new Allied Health Building. Attending were State Representative Larry Yarborough, members of the Person County Commissioners, the Roxboro City Council, and the PCC Board of Trustees.

Dr. Bartlett noted that, despite a 25% cut in its state budget in recent years, PCC has been a good steward of its funds. “The College completed the renovation and expansion of the PCC Bookstore without asking for county funds and has raised over $475,000 towards the Kirby Rebirth: Upstairs, Uptown project, including the refurbishing of the façade of the complex and adjacent businesses. We are dedicated to this community, and we are a good investment for this county,” said Dr. Bartlett.

The NCCCS has identified three budget priorities for the upcoming biennial: Closing the Salary Gap, Closing the Skills Gap, and Closing the Technology Gap. Dr. Bartlett noted that President Barrack Obama’s proposal of free community college has cast a national spotlight on community colleges. “That’s a good thing,” he said. “But in North Carolina, access to community colleges has not been an issue. Success is the issue—making sure that our students have the support that they need to complete their associate degrees and become successful in careers. A quality education requires quality faculty.”

NC Community College instructor and staff salaries rank among the lowest in the southeast, a fact that prompted the NCCCS’s first priority: Closing the Salary Gap. The NCCCS budget is asking the General Assembly to allow the colleges to retain $59 million in recurring funds that they are now required to return to the state as part of its management flexibility cuts and, over a two-year period, invest them in instructor and staff salaries to improve the salary average by 5%. This would move NC instructors and staff salaries from a ranking of second to last in the 16 southeast regional states to the middle of the group.

The second priority, Closing the Interest Gap, seeks to increase interest and enrollment in high school to community college pathways leading to good paying jobs. Employers have expressed interest in NC community colleges developing a pipeline of talented workers to meet current and future work demands. The NCCCS proposes to employ NCWorks Career Coaches in high schools to serve as career coaches for students. PCC placed transition coaches in the high schools this year to provide these services to students in both Person and Caswell counties. Across the state, the project would cost $7 million over a two-year period.

The need for preparing the state’s workforce to use the most current technology and upgrades for the NCCCS’s information infrastructure form the basis for the NCCCS’s third priority: Closing the Technology Gap. Many colleges struggle to equip their labs and shops with the necessary latest equipment. The priority requests $10 million in fiscal year 2015-16 to provide equipment that colleges may use to train students for new technology-based jobs such as technicians and healthcare workers and $5 million in recurring funds to move its IT system to a new operating platform. These funds would be used to provide support to pilot nine community colleges in the new cloud-hosted environment in the coming fiscal year.

Rep. Yarborough, a Roxboro resident who began serving his first term in the NC House of Representatives in January, said he supports the work of the State’s community colleges. He announced that he has introduced legislation to provide year-round funding for community colleges to offer Universal General Education Transfer Courses (UGETC) that transfer to all UNC institutions. This would give students additional opportunities to earn transfer credits. In 2013, the General Assembly authorized community colleges to teach technical education, healthcare, developmental education, and STEM-related courses (science, technology, engineering, math) year-round and to earn funding.

He said PCC’s future plan also calls for the addition of a three-story Allied Health Building that would include a floor for PCC’s Associate Degree Nursing program and other health-related programs, another for PCC’s Early College High School, and the third for a Person County Higher Education Center where four-year schools could offer bachelor’s and master’s degree classes in the county. Dr. Bartlett said the building will require the College to conduct a major fund-raising campaign and to request county funding support.

Person County Commissioner Chairman Kyle Puryear noted that the county has always had “a strong working relationship with PCC.” “When it comes to economic development, PCC is absolutely in the loop, and they have always been a key part of the community. They are a valued asset,” he said.

Roxboro Mayor Merilyn Newell said the City had always enjoyed collaboration with the county and PCC and noted that early PCC classes were held uptown. “It’s been good to get classes right back uptown,” she said, referring to classes being held at the Kirby Studios adjacent to the Kirby Theater. “The population on the sidewalks has gotten younger and younger.”

Dr. Bartlett thanked those in attendance and expressed appreciation again for the work they do in Roxboro and Person County. “The level of excitement and the possibilities available to Roxboro and Person County through the College’s efforts are uplifting, especially during these economically-challenging times,” he said. “They are an indication of the progressive spirit of this community and its desire to be forward-looking and positive.”