PCC to present Greek festival at this year’s StepN2theArtZ

Festival attendees will have the opportunity to participate in some of the activities and will also serve as the audience for several special performances highlighting Greek culture. Caswell County dance instructor Margaret Rowland will teach the audience a Greek dance first thing in the morning, and then the Hellenic Dance Group from Holy Trinity Church in Charlotte, will present a program of Greek dance and music at noon. Other performers will include Kaitlyn the Belly Dancer, who will perform at 1:15 p.m.; and Panos Messis, conductor, pianist and PCC instructor, who will discuss his Greek heritage including Greek music.

Another event planned for the morning is an Olympic Triathlon competition, followed by an Olympic medal ceremony.

A variety of events will be held throughout the day and include pottery demonstrations, solving Tangram puzzles, face painting, and making Greek masks. Greek “gods” will roam the courtyard and engage attendees in conversation. PCC’s welding class will have fashioned Greek letters for sale, and PCC clubs and organizations will sell concessions.

From 2:30-3:30 p.m., author Henriette Lazaridis Power of Boston, MA, will read and sign copies of her debut novel, “The Clover House,” a Boston Globe best-seller and a Target Emerging Authors pick for 2013. PCC students have read Power’s novel as part of the Learning Resources Centers’ Read ‘n See Book Club. Prior to the Oct. 2 festival, Power will meet with PCC English classes on both the Person County and Caswell County campuses on Oct. 1 and will also appear at the Kirby Gallery to read and sign her work at 6 p.m. that evening.

StepN2thArtz is open to the public, and admission is free. Greek concessions and souvenirs will be available for purchase. The College extends special invitations to local schools as well as home-schooled students, PCC students and employees. For more information, contact Dr. Dawn Reno Langley at (336) 322-2207 or dawn.langley@piedmontcc.edu.

Greek American Henriette Lazaridis Powers is a graduate of Middlebury College; Oxford University, where she was a Rhodes Scholar; and the University of Pennsylvania and holds a Ph.D. in English. She taught at Harvard University for 10 years before turning to writing full-time. Her shorter work has appeared in The New York Times Online, Huffington Post, The Millions, and Narrative Magazine among other places. She also is the founding editor of “The Drum,” a literary magazine published exclusively in audio form. A competitive sculler, she trains regularly on the Charles River in Boson.

Kaitylyn the Bellydancer is a sought after performer, choreographer, and instructor in eastern North Carolina. She holds a B.S. degree in Art Education and has had extensive training in various styles of belly dancing. She is the creative director of Aspara, a student dance troupe. She performs in many venues and was featured in the East Coast tour of Alice in Wonderland.

Holy Trinity’s Hellenic Dance Group travels throughout the Southeast to entertain and educate audiences about traditional Greek dance.  Their mission is to pass on to current generations the history and joy of Greek dance and music.  The group ranges in number from 5 to 20 members of all ages.

Panos Messis, pianist and orchestra director, teaches music for Piedmont Community College. Born in Brooklyn, NY and raised in his family’s native Cyprus EU, he began piano lessons at an early age at the Greek Music Academy in Nicosia, Cyprus. He studied at the Vienna Conservatory Private University for four years and received his undergraduate degree from the Manhattan School of Music in New York. He also has a Masters of Art degree in Music and Music Education from Columbia University and a second Master’s degree in Orchestral Conducting from the Aaron Copeland School of Music, City University of New York. In addition to serving as an adjunct instructor at PCC, he also is the choir director at New Brook United Methodist Church in Person County and served on the Chapel Hill School of Musical Arts faculty. 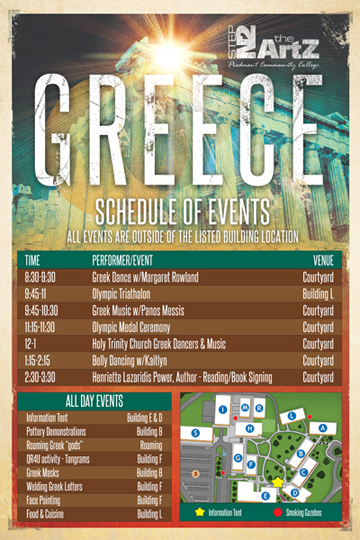