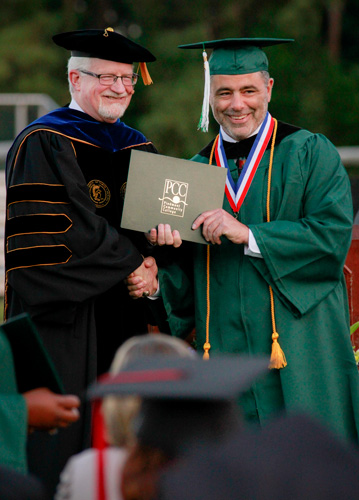 Piedmont Community College (PCC) student Michael Zizzi of Roxboro has been named the recipient of the North Carolina Community College System’s (NCCCS) Academic Excellence Award. Zizzi received his award during PCC’s graduation ceremony on May 16. James J. Woody Jr., a member of the State Board of Community Colleges, presented Zizzi with a plaque and a medallion during his recognition. Zizzi graduated from PCC’s Associate Degree Nursing program with a 4.0 grade point average.“

My decision to go back school and pursue a nursing degree at Piedmont Community College was rooted in my desire to help people,” said Zizzi. “As a former Army combat medic, I was many years removed from direct patient care and had been in medical management in various capacities for years. I obtained a bachelor’s degree after leaving the Army and had never considered going back to school. After talking with PCC’s Director of Nursing in 2011, I realized what a great opportunity PCC offered. The nearby location and low costs made going back to school a no brainer.”

A husband and father of four, Zizzi said he had the new experience of being in class with some of his children’s friends after coming to PCC.

“I was apprehensive at first; it had been many years since I had been in school, and I wondered if I could “hang” with the younger generation; many of my classmates had gone to school with my own children,” Zizzi said. “After a few weeks, I found I could not only do the work necessary but excelled and enjoyed the challenge. Going back to school later in life allowed me to enjoy and embrace learning at a much different level. I have also found I enjoy tutoring first-year nursing students and in a way feel an obligation to give back because of this great opportunity.”

The NCCCS names one student from each of the 58 community colleges to receive the Academic Excellence Award each year. Selection requirements are consistent with Phi Theta Kappa Honor Society criteria. Recipients must be currently enrolled, must have completed at least 122 semester hours in an associate degree program, and must have a cumulative grade point average of no less than 3.25.