The parking lot in front of the S Building at Piedmont Community College was completely empty until about 3 p.m. Tuesday.

Slowly, one car came around the curve at the top of the hill and made its way into the parking lot.

The nurse pinning ceremony is a traditional rite of passage for nursing school students, but restrictions on mass gatherings and social distancing rules made it difficult to carry out the traditional events.

So the school moved the event outside, which seemed to be well received by the 26 students who took part in the event.

As each student came through the parking lot, stopping first in front of a line of first-year nursing school students who gave each student a goodie bag. Traditionally, first-year students sponsor a reception prior to the pinning ceremony to recognize the program’s newest graduates.

As they turned the corner in front of the S building, each car – many of them filled with family members who were recording the event on their cell phones – stopped and a phalanx of nursing program staff members approached.

They gave each student a copy of the nurse’s prayer, a flower and, of course, their nursing pin.

The next visit came from PCC nursing instructor Janine Walls who, each year, dresses as Florence Nightingale, the most famous of all nurses. She spoke to each student in turn as they finished their route through the parking lot.

The event was broadcast live on the community college’s Facebook page and, judging by the comments, the unique ceremony served its purpose as viewers issued well-wishes to the graduates through their social media.

PCC president Dr. Pamela Senegal was pleased with the way people responded to the unusual ceremony.

“I’m grateful to live in a community where everyone is willing to lean into this new normal. It made me joyous to see each student come through. They had family crammed into their cars. I’m so glad we get to mark these important moments,” Senegal said.

The college president noted the significance of holding a ceremony for healthcare workers in the midst of a healthcare crisis.

“Right now, it’s even more important that we celebrate these students transitioning into full time jobs. There’s a reason we do something different for our nursing students and our medical assisting students. We know the work they do is important and it impacts us all,” Senegal said.

With demand from employers and potential students high, Senegal said now may be the time to dust off some old plans to start a second cohort of nursing classes. Typically, students begin the associate’s degree in nursing program in the fall. But Senegal said a new class may begin next year in January.

“It makes me want to double down to prepare people for careers as healthcare professionals,” Senegal said. She said Person Memorial has created a new position to allow the students to go to work when they graduate while they work on passing state licensing exams. And students are also interested in the program. Senegal said the school normally gets about twice the number of applications than it can accept.

With the demand for healthcare on the front of everyone’s mind these days, the time seems right to restructure the program, she said.

And, apparently, the program is well regarded by its graduates. Two families in Tuesday’s pinning ceremonies were celebrating a pair of graduates. Deanna Burch and her son Noah were among the grads as well as siblings Mark and Morgan Zizzi.

“I’m really proud of the number of familial ties we have to our program. I think it says something good when a parent graduates from our program think enough of it to send their children to the same program,” Senegal said. 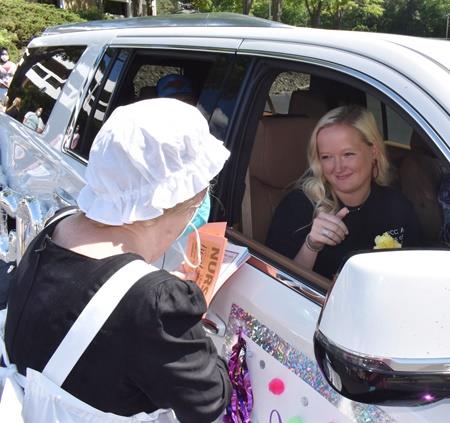